Talentis is the next generation of sourcing software. Its proprietary Talentis TalentGraph takes advantage of AI and big data technology
to allow executive recruiters to track and engage with potential candidates across the web.
All posts

Even those who started their careers in the industry before the dominant global networking platform was born have grown heavily accustomed to its presence, and it’s harder and harder for even the most tenured headhunter to truly recall what it used to be like to recruit in an old-school, pre-digital age.

LinkedIn is everywhere – its member count continues to climb, its platform usage is rising as more and more smartphone users embrace the app alongside the desktop service, and an ever-greater number of previously offline industries are ‘going digital’ and starting to reveal themselves to an eager recruiter base.

And as LinkedIn’s users have increased, so too has the recruitment industry’s dependency on the platform.

As well as using its in-built map of the professional marketplace as a key resource, search firms now store critical information in the platform – saved searches, project folders, conversation histories…

But if it did disappear, what then?

A change in regulation, a switch-up by parent company Microsoft of the pricing model or functionality… whatever the reason, the prospect of life without LinkedIn forces businesses and their staff to consider their Plan B in a world without the tool they’ve grown to lean on so heavily.

Would you sink or swim?

Here’s what it comes down to:

As brilliant as LinkedIn is, it still represents a ‘level playing field’ for competing headhunting firms – everyone has access to the same candidates, and the direct message option (whether it costs an InMail or not) is there for all.

Your propriety database, however, apart from holding personal contact information and resumes/CVs, will have additional data on candidate salaries, motivations, skills, responsibilities and aspirations, but more importantly, their contact history with you or your colleagues, information on any past projects they were considered for or placed, their off-limits status or suitability to be contacted as a source. Surely losing this type of data would be worse.

Before purpose-built networking ‘platforms’ were created, executive search was the ultimate ‘networking’ industry. Conversations with clients often spark new projects; conversations with sources will lead to referrals of top-level candidates, and past candidates will often become new clients.

Skilled face-to-face networking still has a major role to play, even in a highly digital age. Building and leveraging personal relationships are still at the heart of executive recruitment and can create opportunities with or without LinkedIn.

Thinking outside the box

Due to privacy concerns, many elite recruiters have already transitioned to a post-LinkedIn way of working, especially in highly specialized sectors. Since the platform gives every competing firm the same access and (often limited) profile information, uncovering unique candidate profiles takes some extra sleuthing.

The rise of private networking sites such as GatedTalent enable executive recruiters to access detailed information on top executives curated by themselves. Sites like this offer it’s executive members more privacy than LinkedIn, guaranteeing that their colleagues and bosses will not spot any signs that they are ready for their next role.

With or without LinkedIn, to excel in your marketplace and leave the competition behind, there’s a lot to be said for making sure your techniques and processes don’t just follow the herd.

Now a major part of Microsoft’s tech empire, it’s safe to say LinkedIn’s probably around for years to come.

But… if it did disappear…would you sink or swim? 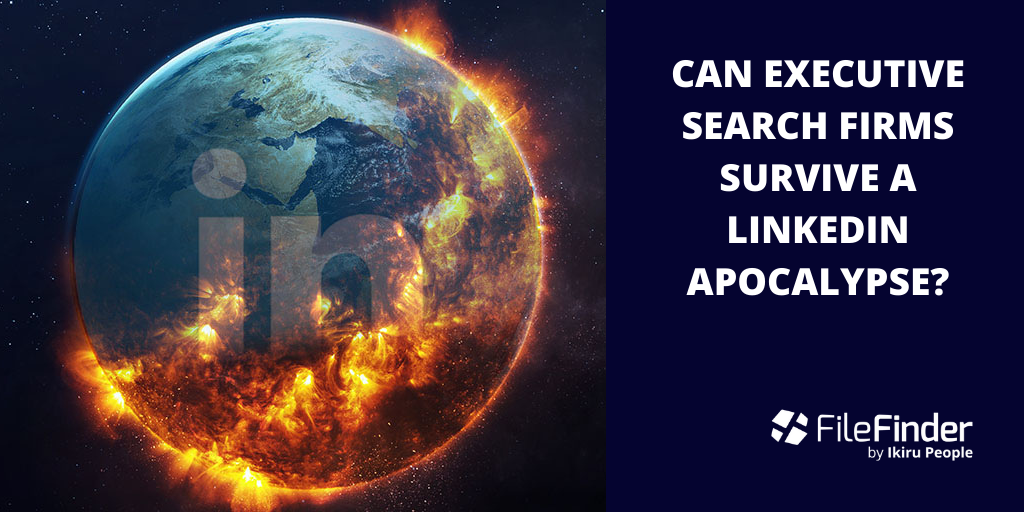